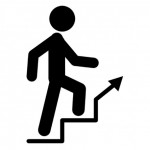 The business rules of all multilevel compensation plans are built using components.  These components include titles, title requirements, and eligible compensation types.

What Is Stair-Step Compensation?

Stair-Step Compensation is a form of differential bonus.

The maximum percentage one can earn is set based on one’s paid-as title or upon one’s group volume for the month.

This continues until all of the stair-step compensation has been paid out.  After that, upline representatives are compensated differently.

Below is an example of Stair-Step compensation:

The beauty of Stair-Step bonuses from the direct selling company’s perspective is that no matter what happens, the maximum paid out in total stair-step compensation on an order is equal to the highest maximum percentage a representative could earn.

Examine the chart above.  A Manager’s maximum Stair-Step percentage is 30%.  If a Manager has a downline representative with a paid-as title of Manager, for example, upon the orders on which the downline Manager earns stair step compensation, the upline Manager will earn no Stair-Step compensation because both Managers are at the same step.

Stair-Step compensation is like a race.  When you are not able to stay ahead of someone below you, you lose.  While in the past this result was considered acceptable, today most people consider penalties like this to be inauthentic, unacceptable, and politically incorrect.  Do you believe volunteers should be punished compensation-wise when a downline representative grows her business faster than an upline representative?

Decades ago, when Stair-Step compensation was first introduced, higher titled distributors in network marketing companies carried an inventory that they supplied to lower titled representatives.  Back then, there was a need for direct selling companies to provide higher titled representatives with as much money as possible, partly to compensate them for the business risk they took on when they leased space to house their inventory.

The world has changed.  Distributors no longer carry inventory.  That business risk is gone and so is the need for Stair-Step compensation.