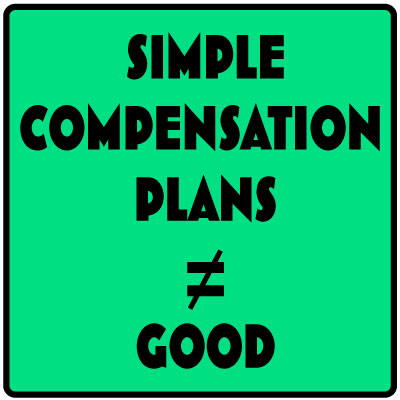 Simple MLM compensation plans are attractive because they are easy to explain.

Unfortunately, simple compensation plans don’t motivate all of the behaviors that we want from a direct selling sales force.

We also want to motivate and reward the development of new leaders by current leaders, regardless of where the new leaders are in the downline of the existing leader. Compensating representatives on the volume of others one, two or three levels down doesn’t do the job.

While it is true that the average representative never recruits anyone, the recruiting rate is important. The percentage of representatives who recruit at least one person is between 20% and 25% in most party plan companies and between 30% and 40% in most network marketing companies. If your starter kit cost is low, you will see a lower rate of recruiting, because more people will join just for product discounts.

Most representatives of party plan companies earn the majority of their income from personal sales, but the top earners receive most of their income not from personal sales, but instead from bonuses earned upon the sales volume of others. As a sales force matures, the bulk of the volume generated moves down the tree. In other words, for representatives who recruit others, over time they see their bonuses being earned from volume generated from deeper in their organizations. To be able to provide full-time income to those representatives who seek it, compensation plans need to pay upline representatives on more than just a few levels of volume.

One of our frequently requested services is compensation plan design. If you’d like help with yours, we’re here for you!  For answers to your questions, call 503.244.8787.