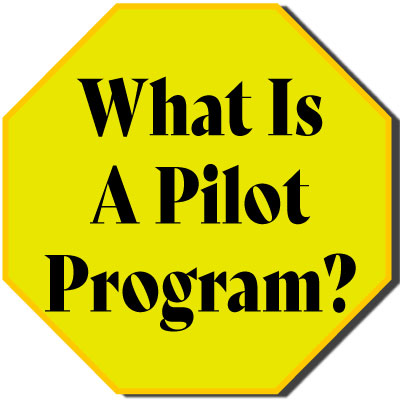 What Is A Pilot Program?

A pilot program is a group of activities planned as a test or a trial of a business model. Some party plan companies and network marketing companies choose to conduct a pilot program before officially launching their direct selling companies.

Why Do A Pilot?

The more you know about your business, the wiser you can be in operating it. Would you rather get smart along the way, or learn a bunch before you launch to steer your representatives away from activities that don’t work?

If you’re feeling uncertain and you’d like to minimize your risk of failure, doing a pilot is the best way to increase the odds that your business will be viable.

Here are some questions answered through pilots.

The second step is to create the materials necessary to conduct the pilot. Only your pilot representatives should know this is will be a market test. Everyone else needs to believe this is a real business that just happens to be young. You will need to develop materials before the pilot is executed. A pilot cannot be conducted successfully without materials in place first.

While you will need to compensate your pilot program representatives, you won’t need a fully developed multilevel compensation plan for the pilot.

After the three steps above have been completed, then the pilot can be executed. A pilot is a market test that takes place over a defined period of time, usually 4 to 12 weeks.

Before the results of the pilot are known, we don’t know what will happen next. Will you proceed directly to a soft launch or a hard launch? Or will you adjust the business model slightly, or retool it significantly, and possibly pilot it a second time?

After the pilot, you’ll have results that can be evaluated. Then, you will decide if the business will proceed forward with no changes or with some changes, or in rare situations, a business won’t move forward at all.