You are here: Home / All Videos / Is It Wise To Have A Simple Compensation Plan?

Simple compensation plans have only one virtue and that is, they are easy to explain.  Everything else about them isn’t good.

Have you ever wondered, then, why do people design simple compensation plans?  The reasons might surprise you.

To hear more on this topic, watch our informational video below.

Design Without Awareness Of The 12 Behaviors

Simple compensation plans cannot encourage and compensate independent representatives of direct selling companies for the activities we want them to perform.

At one of our Direct Selling Edge Conferences, I was asked if simple compensation plans were safer.

Given the regulatory action against Vemma and Herbalife in the last few years, I understood why I was asked this question, so I responded first to this concern.

I explained that one of the objections raised by uninformed regulators and critics of direct selling has been the complexity of multilevel compensation plans.   Some of them believe incorrectly that a complex compensation plan is a symptom of a criminal enterprise.

This conclusion is as absurd as saying that suits are a marker for illegal activities because white collar criminals wear them.

As long as your compensation plan in practice does not violate federal, state, and local laws, it can be as complex as is necessary.  Remember, the purpose of compensation plans is to motivate and reward the 12 essential behaviors we all want from a direct selling sales force.

If you own or are employed by a network marketing or party plan company, two of your primary goals should be to attract and retain your independent sales representatives.

Can We Start With A Simple Compensation Plan?

Some companies think about starting with a simple compensation plan, with the idea to change their plan later.  This is not a good idea.  At a minimum, it will reduce your rate of growth significantly, but even worse it may be a cause of business failure.

Most companies cannot afford a “do over.”  For financial reasons, they need to get it right the first time.

I don’t recommend that you begin your direct selling company with a simple compensation plan and then change your plan later.  Here’s why…

Simple compensation plans are not safer for the survival of your business.  The word I would use to describe them is “unsafe.”

Simple MLM compensation plans are attractive because they are easy to explain.

Unfortunately, simple compensation plans don’t motivate all of the behaviors that we want from a direct selling sales force.

We also want to motivate and reward the development of new leaders by current leaders, regardless of where the new leaders are in the downline of the existing leader.  Compensating representatives on the volume of others one, two or three levels down doesn’t do the job.

While it is true that the average representative never recruits anyone, the recruiting rate is important.  The percentage of representatives who recruit at least one person is between 20% and 25% in most party plan companies and between 30% and 40% in most network marketing companies.  If your starter kit cost is low, you will see you a lower rate of recruiting, because more people will join just for product discounts.

Most representatives of party plan companies earn the majority of their income from personal sales, but the top earners receive most of their income not from personal sales, but instead from bonuses earned upon the sales volume of others.  As a sales force matures, the bulk of the volume generated moves down the tree. In other words, for representatives who recruit others, over time they see their bonuses being earned from volume generated from deeper in their organizations.  To be able to provide full-time income to those representatives who seek it, compensation plans need to pay upline representatives on more than just a few levels of volume.

One of our frequently requested services is compensation plan design. If you’d like help with yours, we’re here for you!

To be successful long-term, all direct selling companies need to have dynamic compensation plans that aren’t simple.

If you need help with any aspect of your compensation plan, contact us at 503.244.8787.  We are happy to help you on your journey. 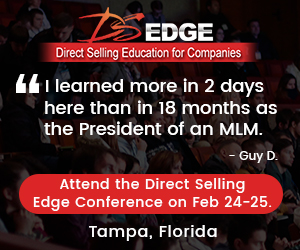 Best Book For Your Business

"The best startup manual for network marketing and party plans, period! Jay covers all of the pertinent details." "I love the worksheets! You can write everything down. There is so much in here that I hadn’t considered." "This guide is incredibly helpful because it takes me step-by-step through what needs to be done."

"Thank you for the insight brought to us and the excitement in which you communicate!" "I enjoyed the presentations. Very informative, especially the linkages between plan design and key behaviors. Well done and would be happy to be a reference.." "In depth. Highly informative. I have definitely learnt a lot. Thanks!"