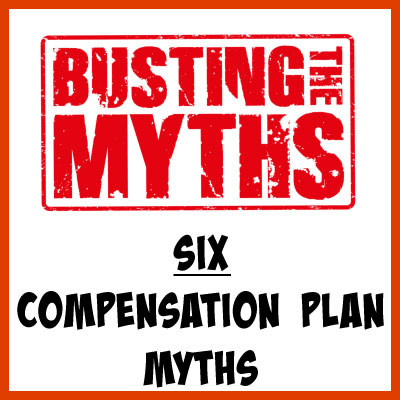 A myth is something many people believe to be true, but it’s not.  Sometimes if you believe a myth, you can get hurt.

Compensation plan myths are especially dangerous because they can lead to poor business decisions that can kill or wound your company.  In this article, we’ll share 6 of them with you.

There is only one good thing about simple compensation plans and that is, they can be explained easily. Other than that, simple plans are bad for your business and the business of your independent representatives.

This is because simple compensation plans don’t motivate and reward the 12 essential behaviors that we want from your sales force.

If you look at the compensation plans of successful companies, you will see that none of them are simple.

Myth #2:  Most People Will Recruit

“This business is all about recruiting.  That means everyone who joins my company (or almost everyone) will recruit others.   That’s a fact.”

Actually, that’s a myth!  The truth is that most people won’t ever recruit, but fortunately, some of them will.

For direct selling companies who discourage joining just for product discounts, the percentage who will recruit at least one will fall between 15% and 35%.  If your barrier to entry is low and people will join just to save money when they order your products, your rate of recruiting may be less than 15%.

If your compensation plan is designed based on the assumption that almost everyone will recruit, you will have a big problem.

Myth #3:  I Should Borrow Another Company’s Plan

“If it’s good for company ABC who is successful, then if I borrow their plan perhaps with a few changes, that means I will be successful, too.”

Nope, that is myth #3. The compensation plan is an important ingredient in the recipe for success, but it’s not the only ingredient, and using another company’s plan can turn out to be a very bad business decision.

If you do this, you are assuming your company will make the same decisions the other company made when its plan was designed. Here is the problem… You don’t have enough information to know whether these decisions that were made by others for their company are appropriate for you and your company.

So, when can I use another company’s compensation plan?

Designing a compensation plan is a lot like building a new house.  For your home to be structurally sound, financially affordable, legally compliant with building codes, and designed to last your family for years as it grows and its needs change, it’s wise to have experts design your home and other experts to build it.

The average Joe or Jill doesn’t have the skills and experience to be able to design a compensation plan that will work well to attract and compensate new reps, encourage and reward leadership development, and provide the ability to generate full-time income and more for top performers.  The majority of people do not know how to design a legal compensation plan either, because they don’t know the laws.

Myth #5:  I Should Patent My Compensation Plan

A patent is an exclusive right granted by a government to an inventor to manufacture, use, or sell an invention for a specific number of years.

The purpose of a patent is to protect your invention by preventing others from benefiting financially from it. Patents are granted for new inventions or new uses of inventions.

You may have read about compensation plans that are “patent pending.” This means a patent application was filed for a plan. It doesn’t mean a patent was granted or ever will be.

Don’t waste your time filing a patent application for your compensation plan.

There are different types of compensation plans. One of them is a “matrix.”

When the first level is full, the sponsor chooses specifically where to place a newly enrolled representative, or direct selling software can place the new representative in the first open position.

I believe that history is a good teacher. Do you know how many direct selling companies with matrix compensation plans have made it to their 10th birthday?

The answer is one and that one, Melaleuca, uses the enrollment structure for qualification requirements. The matrix structure is used only for placement. Every other company that has chosen to use a matrix compensation plan has lived a short life.

There is a reason for this, and that is, if you tell your reps they don’t have to work very hard due to spillover, they will listen to you. Not working hard is exactly what you don’t want them to do.

Read Our Guide For New Companies