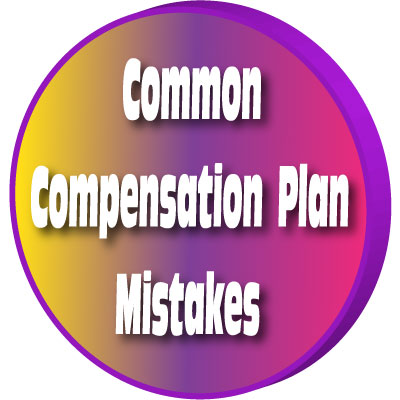 At our Direct Selling Edge Conference for new and young network marketing and party plan companies, I present two sessions on compensation plans.  Toward the end of the second segment, I shared with the attendees eight common compensation plan design mistakes.

These are very important, so I am sharing them with you now.

Less often (but this still happens) companies establish title promotion requirements that are too easy.  For example, if all you needed to reach the highest title in your compensation plan was to recruit personally 10 people over your career, you would be building a culture that rewarded mediocre performance over a period of time instead of rewarding the building of strong teams.

Everyone loves optimistic people.  Well, most everyone does!  It’s good to be optimistic, but it’s so much better to be realistic when it comes to salesforce performance.  For example, if you think everyone enrolled is going to enroll five others, you’ll be vastly disappointed.  Not only that, but you will be setting totally unrealistic expectations for your sales force, too.  Understanding the performance of average and atypical representatives is critical.  If you don’t have this handled, you need some help.  (At Sylvina Consulting, we can help you!).

Insufficient Rewards To Recruit Others

Direct selling companies depend on recruiting for growth.  If your compensation plan doesn’t motivate and reward recruiting, you won’t get the volume of recruiting that you need to grow your company.  Some companies pay very small bonuses on the sales volume of personally enrolled representatives.  This is a serious mistake.  Consider this:  if you don’t reward recruiting sufficiently, the percentage of those who recruit will be low, but even worse, the percentage of those who recruit again will be even lower!  Make sure your compensation plan rewards the recruiting behavior.  At the same time, don’t make the mistake of paying representatives merely for the act of recruiting.  All bonuses should be based on sales volume!

Insufficient Rewards To Teach Others

Recruiting is important, but so is supporting your team members.  Some companies don’t adequately do this through compensation.  Paying only a few levels of bonuses is insufficient to encourage and reward team-building behavior.  Simply put, without adequate compensation, teams aren’t built or if they are built, they aren’t strong.

I like to say if a compensation plan can be fully explained on a single piece of paper, it’s an incomplete plan.  This is because fully designed compensation plans motivate and reward several distinct types of behaviors and they require many pages for a complete explanation.  While an incomplete plan is much better than no plan at all, to do the job right, your plan needs to be complete.  How do you know if yours is complete or incomplete?  Easy.  Ask Sylvina Consulting.  We’ll review your plan for FREE and tell you how it looks to us.

Some compensation plans have illegal aspects to them.  Most of the time, the company with an illegal plan doesn’t know what they are doing breaks state and/or federal laws… until someone who knows tells them.  While we are not attorneys, we have worked with network marketing and party plan companies for 25 years.  At the same time, we have worked closely with many MLM attorneys.  We know what is clearly illegal and what is close to the line.  For example, if you require personal consumption of your products to be qualified to earn multilevel compensation, you have an illegal plan.  This is but one example of illegal compensation.  There are others.

Just like other things in life, it’s easy to make mistakes.  Some kinds of mistakes have minor consequences.  Compensation plan mistakes can have significant impacts on your company’s growth and health.