You are here: Home / All Videos / Focus On Binary Compensation Plans 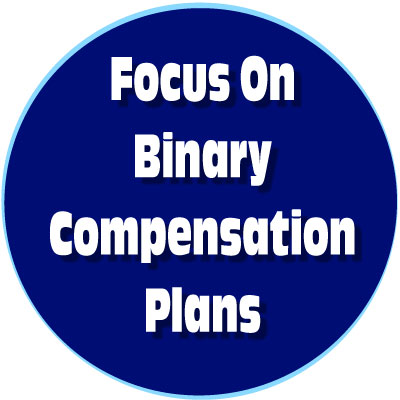 Does that mean your plan should be a binary plan?  Perhaps and perhaps not.  In this video, I will explain the pros and cons of this type of compensation plan.

A binary compensation plan is structurally similar to a two-wide matrix.  However, the compensation method for a binary plan is totally different.

Unlike other compensation plans that pay bonuses using percentages of a single commission period’s sales volumes, binary compensation plans pay threshold bonuses based on the accumulation of unpaid volumes on the “left” and “right” sides of a representative’s organization.

How Pay Is Calculated

In a binary compensation plan, sales volume is accumulated from each independent representative’s left leg and right leg. Compensation is paid on accumulated unpaid volume in one of three ways:

A cycle is defined as a total of accumulated unpaid volume from both legs, where at minimum 1/3 of that volume comes from one leg, and a maximum of 2/3 comes from the other leg.

A cycle is defined as a total of accumulated unpaid volume from both legs, where 1/2 of that volume comes from one leg, and 1/2 is generated from the other leg.

For example, a cycle could be defined as a total of 900 accumulated unpaid volume points.  When you have 450 points in one leg and 450 in the other, you could earn $40 or perhaps a different amount.

With this type of binary, there are no cycles. Independent representatives are paid a percentage of the accumulated unpaid volume in the weaker leg, that is, the leg with the smaller amount of volume.

For example, if you had 200 accumulated unpaid points in your weaker leg, you could earn $20 or perhaps a different amount.

How You Are Paid

Which Binary Flavor Is Better?

The answer is there is no clear answer.  Which is better depends on two factors and these are:

We will explore each of these factors, but first, let’s explain what a power leg is and who gets one.

What Is A Power Leg?

A power leg occurs when one of two situations is present:

Are Power Legs Rare Or Common?

Since there are two situations that cause power legs, let’s examine each of them individually.

Power Legs From Your Upline

To become qualified to earn Team Bonuses, it is common to require that an independent representative enrolls one active rep in each of one’s two legs.

If your enroller has a power leg, it is not in your enroller’s best interest to place you into his or her power leg!  This fact contributes to the preponderance of representatives who are not placed in a power leg.

Power Legs From Your Enrollment Tree

For the representatives who build an enrollment tree large enough to qualify to be paid binary team bonuses, there will almost always be a power leg because it is very difficult to build your organization in both of your legs exactly evenly all the time.  In fact, one’s power leg may switch from one side to the other many times.

To lower the company’s total payout, the amount paid per cycle is typically less than it would be if the company used a 50 – 50 or percentage of weaker leg approach.

Which Binary Flavor Is More Lucrative For Representatives?

If the amount to be paid for the volume generated in all three flavors were the same, the most lucrative flavor for independent representatives would be the Percentage of Weaker Leg Volume because they don’t need to wait for a specific amount of unpaid accumulated volume to be generated before they are paid.

“What is best for some is not always best for others.”

If your goal is to be fair to all representatives, the 50 – 50 and the Percentage of Weaker Leg Volume flavors accomplish this goal.

If your goal instead is to reward the smaller percentage of representatives with power legs, the 1/3 – 2/3 flavor may be more to your liking.

To Cycle Or Not To Cycle?

The 1/3 – 2/3 and 50 – 50 flavors use cycles.  The Percentage of Weaker Leg Volume flavor does not use cycles as it pays based upon the volume in one’s weaker leg.

I say the binary compensation plan is like a runaway freight train. We need to slow down the payment of commissions and bonuses. Using cycles is one way to do it, but there are many others.

How To Reduce Payout

About The Total Payout Cap

The purpose of the commission period payout cap is to give a direct selling company the power to set a budget for compensation plan earnings as a percentage of a commission period’s volume.

Interestingly, most independent representatives don’t think of the payout cap in the same way a company sees it.  Reps read it as “you will pay out this much” instead of “you won’t pay out more than this much.”

It is never good news when a company chooses to enforce a payout cap because when this happens, reps experience an undeserved “pay cut”.

How to Calculate Maximum Payout

In addition to implementing the steps above, it is important to model the payout of your binary compensation plan to calculate the maximum payout.

Do You Need Help With Your Binary Compensation Plan?

Compensation plans are complex systems, each component of which has one or more specific purposes.