You are here: Home / Communication / What I Learned In South Africa 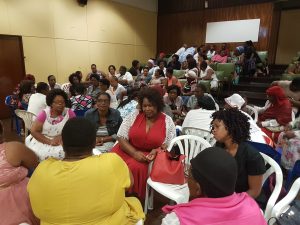 Traveling to a foreign land for me is always a learning experience, but when I can do it while helping direct selling companies and their field leaders, it’s even sweeter.

On my recent trip to South Africa, I conducted two Focus On Recognition workshops in Johannesburg and Cape Town that were attended by home office personnel of 7 different direct selling companies.

In each of these workshops, I taught a half-day course on awards, contests, incentives, and promotions. The real purposes of recognition, the most common mistakes companies make, and recognition best practices were each discussed in detail.

In the final hour, I presented the details of the recent FTC actions in 2015 and 2016 against Vemma and Herbalife, because lawmakers in countries outside the USA pay attention to our legal activities.

The students in attendance represented both young and well-established direct selling companies. They asked many great questions and learned a lot.

I learned that while some of the companies recognize consultant birthdays, none of them use a birthday as a time to recognize personal consultant achievements in the last year with the birthday celebrant.

Some companies depend heavily on incentives for recruiting, while others don’t.

The larger companies had given more thought to recognition, which was to be expected.

Most of the companies identified software limitations as a barrier to implementing a full-blown recognition strategy. There is clearly an opportunity for MLM software companies to provide badly needed functionality to direct selling companies who wish to expand their recognition initiatives.

On this same trip, I facilitated a meeting with 10 executives and 40 field leaders of one of my clients on this same topic of recognition.

At the beginning of the meeting, I presented the same information delivered at the other recognition workshops to give everyone a clear understanding of the purposes of recognition.

Then, I asked each of the field leaders for their ideas on achievements that can be measured that are worthy of recognition.

The field leaders had so many good ideas! I was surprised to discover that most of their ideas were very similar to mine, while a few were new concepts.

I enjoyed meeting with these field consultants very much because I’ve met with many of them previously when I traveled to South Africa to design for their company a brand new compensation plan. To me, they are becoming old friends.

“Try to learn something new every day.” That’s how I live and I’m not done yet.

On this trip to South Africa, I learned the most when I led field meetings with a client’s independent consultants in four different cities.  Wow, did I learn a lot in each place.

Whenever I work with an established direct selling company, as part of my preparation before offering advice, I like to meet with a group of its consultants and field leaders to ask them what they like and don’t like about the company. Getting this input is very important to me because I need to know the field’s pain points before I can improve their experience and I also want to know what they love best to make sure we don’t take that away.

We delayed the start of the first of the four meetings by 30 minutes because while we were expecting 50 people, only 15 or so were present at the scheduled start time.

After we began the meeting, to my surprise people continued to arrive.

When we took a break, I wanted to count them, so as we do in the USA, I began counting people with my finger. I learned quickly from the client that was an insulting thing to do because in South Africa people are not counted, animals are. I put my finger down and she counted with her eyes.

When the meeting ended, we had 98 consultants present.

Many of the consultant concerns were specific issues that I had not seen before in any other direct selling company. Most were related to logistics and credit requirements, while others reflected concerns with enrollment and deactivation rules.

After the first meeting, I decided to use a new approach to understand what the consultants were thinking.

I created a list of 20 questions, separated the attendees into groups of 5 or more, and asked each group to provide at least 5 answers to the one question I assigned to the group. Here are five examples of the types of questions I asked:

I created special questions for the branch managers so that I could understand from their perspective what they thought were their primary responsibilities.

I used this new approach at the second, third, and fourth meetings and I discovered afterward that while most of the answers to the same questions were similar, sometimes they were significantly different.

Gathering information this way enabled me to assess not only what the consultants thought, but also how they were trained.

“We set a plate at someone’s table.”  This was how one consultant described their income opportunity.   I see clearly that direct selling in South Africa is truly more of a life-changing opportunity than in my home country, the USA.

I look forward to returning to South Africa on another business trip to do some more good work.