You are here: Home / Recruiting / Master Distributors: Good Or Bad 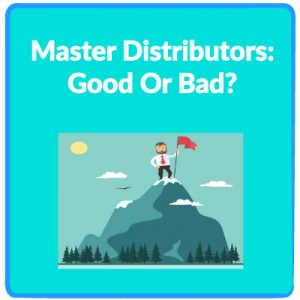 A master distributor is a person you put at the top of your genealogy, the one in whose downline every other independent representative will be placed. Master distributors are optional.

Should your company have a master distributor?

In this post, I’ll explain the pros and cons of such an arrangement. Then, you can decide what’s best for your company.

The growth of all direct selling companies depends on recruiting new independent representatives.

In the beginning, most owners of new and young companies do the initial recruiting themselves and they continue to recruit until the number of new recruits enrolled by their independent representatives each month consistently exceeds a target, or until the company’s monthly sales are high enough to conclude the company can stop enrolling representatives.

There is another option, the master distributor option.

Some companies search for a top recruiter with years of experience, one who has previously built a large downline in one or more companies, who is looking for an opportunity to build again, but this time with a special arrangement.  The arrangement includes the privilege of sitting at the top of your company’s genealogy.  In this position, all new representatives will be placed into his or her downline.  This means that the master distributor will earn compensation upon the sales volume of all of your independent representatives for many years.

The person at the top of the genealogy is announced and promoted as the company’s master distributor.  While he or she is an independent representative, the master distributor has a special inside relationship with the home office.

The perception in the field is that if the master distributor believes something the company is doing is good, then it is good for every other independent representative.

Do you want to have a second president?

Several times each year I am asked how many many independent representatives should be on the front line of a direct selling company.  In other words, how many legs should a company have?

My answer is as many as possible, but I recommend a minimum of 20.  The purpose is to strategically prevent any one independent representative from having too large a percentage of a company’s reps in his or her downline.

Why does this matter?  Some independent representatives whose downlines include a large percentage of the company’s reps realize they have a lot of power which can make company owners nervous, fearful, and concerned.

What Not To Do

If you choose to have a master distributor, make sure he or she is not an owner or employee of your company.  Placing owners or employees into your genealogy is always a bad idea.

Every action we take in business has an associated risk.  Placing someone into the position of master distributor for your company is no exception.

If you have known your master distributor for many years, the risk is lower than if the relationship is brand new.