You are here: Home / Policies & Procedures / Be A Top Direct Selling Company! 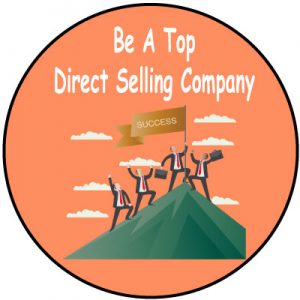 Would you like your company to be a top direct selling company?  “Top” means one of the first on a list, but what kind of list are we talking about?  In this post, we’ll examine what it could mean for you.

The largest direct selling companies in the world have annual revenues in excess of $1 billion.  How long will it take for you to be a top direct selling company if you are measuring annual sales as your criteria?  My answer is “too long.” My guess is that you don’t want to wait years to be a top company, so let’s look  at other definitions of  “top.”

The direct selling companies with the fastest growth rates (in sales and/or recruiting) are at the top of this list for a relatively short period of time.  Given that most direct selling companies are privately held and most privately held companies do not release their financials, how would you know if you were growing at the fastest rate?  My answer is you wouldn’t.  Clearly, growing at a fast rate is not a good way to measure “top” companies.  Fortunately, other measures can be considered.

The companies with the highest earnings per independent representative probably have the highest sales average per independent rep, too.  The companies that they represent also may have the richest compensation plans, which is directly related to the relationship between their costs of goods sold and the retail prices of the items they sell.  If your multiplier (average retail sales price divided by your COGS) and sales per consultant are all at the top of the range relative to other direct selling companies, then defining “top” as “highest average earnings per independent representative” may be an achievable goal for your company.  If not, I suggest you define “top” in some other way.

Perhaps “top” should be measured based on happiness.  Can your company be the top direct selling company for having the highest representative satisfaction level?  This sounds great, but in order to make this claim, you would need to invest in surveying random groups of independent representatives of not only your company but other companies as well.  Most companies won’t spend money on this pursuit, so let’s consider other measures of “top”.

You can find out the number of households in your country and the number of people living in the average household (2.6 per the US Census Bureau).  You can count the number of unique customers and distributors who have made a purchase from your company.  With this information, you can calculate the rate of penetration.  This is a great way to measure your progress and growth as a company, but without the same information on other companies, how can you know if you are at or near the top?  The answer is “you can’t know,” so unfortunately this measure for top can’t be known.

Aiming to be a “top” company sounds great, but on a practical level, I suggest you set for yourself a different type of goal.  Instead of measuring a goal against others, aim for “personal best.”  What can you do as a company in the future better than you did before?  When looking at personal best, all of the above measures look pretty good, don’t they?  Let’s review them now: